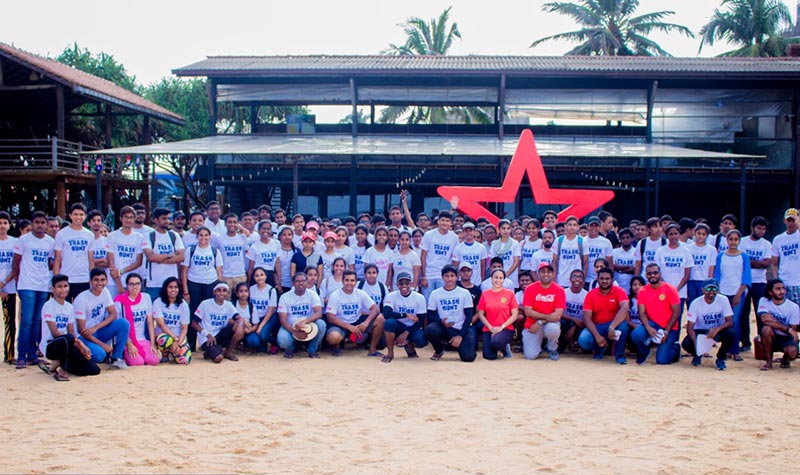 “Trash Hunt – The Colour Run”, was a competition to collect the most trash across 7 beaches in 7 cities as a team. This Challenge saw the participation of over 200 volunteers who covered the cities of Panadura, Moratuwa, Rathmalana, Mt. Lavinia, Dehiwala, Wellawatte and Bambalapitiya. It was carried out as phase 3 of the “Trash Hunt” series, which is a year long beach clean-up project under the Green Life avenue of the Rotaract Club of Pearl Island.

Coca-Cola through its ‘Give Back Life’ campaign partnered the event with the Rotaract Club of Pearl Island which also saw active collaboration from the Rotaract Clubs of University of Moratuwa and ACBT along with the Interact Clubs of Wesley College, S. Thomas’ College Mount Lavinia, Ananda College, Maliyadewa College, Maliyadeva Balika Vidyalaya and the Interact Club of Colombo North.

Commenting on the partnership Mr. Shimer Ahamed, President of the Rotaract Club of Pearl Island said,” Through the Green Life avenue of the Rotaract Club of Pearl Island we are involved in a series of beach clean-ups that are to take place across the country. Our key message is to be part of the solution and not the pollution and it is indeed a privilege to partner with a corporate such as Coca-Cola Beverages Sri Lanka Limited, whose goal is to collect and recycle the equivalent of every PET plastic bottle they produce in Sri Lanka through their very exciting ‘Give Back Life’ program.”

Mr. Lakshan Madurasinghe, Director – Public Affairs, Communications and Sustainability commented, “The right partnerships are vitally important to address the challenge of collection and recycling of plastics across our nation. Rotaract Pearl Island now resides as a youth partner of Coca-Cola’s ‘Give Back Life’ campaign. We are very proud of this partnership.”

Coca-Cola Beverages Sri Lanka Ltd. recognized for the Conservation of the Coastal and Marine Environment in Sri Lanka

‘Power Woman’ from Rotary Negombo set for 8th March with drawing over 5,000 Women