(Left image) Commercial Bank Chairman Mr Dharma Dheerasinghe and Army Commander Lieutenant General Shavendra Silva at the exchanging of the agreement and (Right, top and bottom) senior representatives of the Bank and the Army at the presentation and the agricultural machinery and equipment donated to the “Thuru Mithuru Nawa Ratak” project.

The Commercial Bank of Ceylon has announced a partnership with the Sri Lanka Army to financially support the second phase of the ‘Thuru Mithuru Nawa Ratak’ initiative designed to transform Sri Lanka into a country self-sufficient in essential food.

The second phase entails cultivating 125 acres of land with the involvement of 150 low-income farming families to grow various crops in line with national requirements under the close supervision of the Security Forces Headquarters of the Central Province. The Sri Lanka Army will provide the necessary facilities and skills, and disseminate knowledge regarding effective cultivation to encourage these families to cultivate their own lands and help build domestic agronomy.

The funds donated by Commercial Bank CSR Trust will go towards the purchase of agricultural machinery and equipment including hand tractors, mini cultivators, mini rotary slashers, and a tine tiller; irrigation facilities such as ten 1000-litre water tanks and nine water pumps and 620 kgs of carrot, bean and maize seeds.

Commenting on the Bank’s involvement in this initiative, Commercial Bank Managing Director Mr S. Renganathan said: “Commercial Bank has historically been one of the largest supporters of micro and SME in the agrarian sphere through the Bank’s Agriculture and Micro Finance Units because we believe this sector is the backbone of the rural economy of Sri Lanka. By funding this noble initiative of the Sri Lanka Army, we are now part of a greater plan to propel Sri Lanka towards food security and self-sufficiency. This aligns well with our aspirations for the country.”

‘Thuru Mithuru Nawa Ratak’ is a macro level programme initiated by the Chief of Defence Staff and the Commander of the Sri Lanka Army Lieutenant General Shavendra Silva, and is headed by the Chief of Staff of the Sri Lanka Army Major General Jagath S. Gunawardena. It seeks to promote domestic agriculture by means of distributing seeds and plants to stimulate an agricultural renaissance by cultivating lands with the support of military bases across the island.

The project is implemented under three phases. The first phase involved the Sri Lanka Army cultivating over 1500 acres within army camps. Upon the completion of phase two which is supported by the Bank, the third phase would entail the Sri Lanka Army acquiring crown lands across the island to further expand cultivation.

Commercial Bank CSR Trust has an extensive, multi-dimensional portfolio of community initiatives that promote IT literacy, online education and vocational training for school leavers; donate essential equipment to hospitals; support the preservation and restoration of sites of historic, cultural or religious significance; promote environment conservation and support communities during their hour of need.

The first Sri Lankan Bank to be listed among the Top 1000 Banks of the World and the only Sri Lankan bank to be so listed for 10 years consecutively, Commercial Bank is celebrating its 100th anniversary this year. The Bank, which won more than 50 international and local awards in 2019, operates a network of 268 branches and 873 ATMs in Sri Lanka.

Commercial Bank’s overseas operations encompass Bangladesh, where the Bank operates 19 outlets; Myanmar, where it has a Representative Office in Yangon and a Microfinance company in Nay Pyi Taw; and the Maldives, where the Bank has a fully-fledged Tier I Bank with a majority stake. 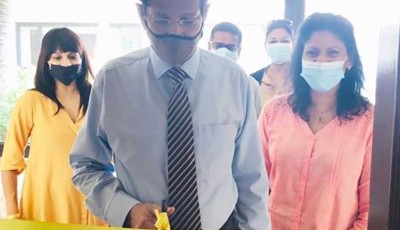