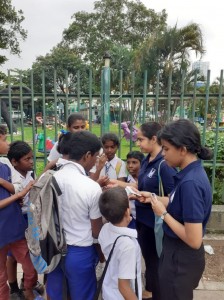 John Keells Foundation (JKF) conducted a successful campaign against gender-based violence on 25th November 2019 to coincide with the International Day for the Elimination of Violence against Women, for the fourth successive year. This year’s campaign was under the theme ‘Report for Support’ and the public campaign was carried out in five selected locations in collaboration with Sri Lanka Police and businesses of the John Keells Group – namely, Elephant House factories, Cinnamon Hotels and Resorts, Keells Food Products and Keells Supermarkets.

The overall objective of the initiative was to raise awareness, both internally among the employees of the Group, and externally among selected communities on police helplines and support for victims of violence. The project aimed to create an environment where victims and bystanders are aware and act on the importance of reporting to prevent and mitigate gender-based violence.

Over 30 staff volunteers of the Group engaged in distributing approximately 10,000 information cards and 200 posters amongst the police stations, government and private institutions and members of the community in Colombo 02, Ranala, Hikkaduwa, Kalutara and Ja-Ela. The volunteers and JKF staff who were deployed in the Colombo 02 area actively engaged with the public to explain the objectives of the campaign and experienced the overwhelming interest and support from residents, office workers and three-wheeler drivers alike. Volunteers of Hikka Tranz by Cinnamon took the initiative to distribute the information cards and posters at the Divisional Secretariat office, Vocational Training Centre and some banks in Hikkaduwa and reported similar support from the related institutions and personnel. Volunteers from Elephant House factories in Ranala reported displaying posters at the Navagamuwa Police Station, Kaduwela Main Bus Stand and nearby shops.  Further an internal awareness campaign comprising bulk SMS and posters was also conducted across the John Keells Group.

Speaking on the campaign, Ms. Carmeline Jayasuriya, JKF’s Head of Operations, CSR, stated, “We consider education and increased awareness of our children, youth and adults as a primary and critical step in changing attitudes and behaviours when it comes to combating gender-based violence which has become a growing menace in society. This year we partnered with Sri Lanka Police for the first time in raising public awareness on the police helplines and the importance of reporting incidents of harassment. We appreciate the support we received from the police hierarchy as well as from officers at the respective police stations, some of whom accompanied our volunteers in the campaign. I should also commend the active support we received from John Keells business heads and volunteers in the respective locations in implementing the campaign.”

The annual public campaign is one of the many initiatives carried out by JKF, the Corporate Social Responsibility arm of John Keells Group as a part of ‘Project WAVE’ (Working Against Violence through Education) – a long-term initiative launched in 2014, to combat gender-based violence and child abuse through education and awareness creation encompassing employees of the Group, strategic target communities and the general public. Whilst external interventions have included sensitisation and training for police officers, lawyers, school children and community members, public transport campaigns have targeted both bus and train commuters of the City. JKF has also just completed its first train-the-trainer programme for volunteer staff resulting in 15 trainers who will be mobilized in future awareness creation within and outside the Group.

The John Keells Group firmly believes in promoting inclusivity and diversity in the workplace as an essential means of attracting talent and enhancing the productivity and wellbeing of its workforce. Its enabling policy framework includes Equal Opportunity and Non-Discrimination, Policy Against Sexual Harassment and HIV & AIDS Workplace Policy which are accompanied by ongoing awareness creation and a clear grievance handling mechanism.

JKH, a Sri Lankan company, operating over 70 companies in 7 diverse industry sectors and currently holds the highest market capitalization in the CSE. JKH provides employment to over 13,000 persons, is a full member of the World Economic Forum and a member of the UN Global Compact. JKH drives its CSR vision of “empowering the nation for tomorrow” through the John Keells Foundation and through the social entrepreneurship initiative, ‘Plasticcycle’, operates with the vision of “becoming a catalyst in significantly reducing plastic pollution in Sri Lanka”.