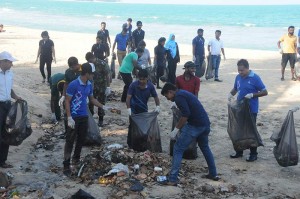 Sri Lanka Telecom (SLT), the leading ICT solutions provider in the country initiated and conducted a timely prerequisite of coastal preservation by organizing a clean-up event at the Arugam Bay coastline recently with the invaluable  teamwork, commitment and dedication of the SLT staff members from Ampara and Kalmune regional offices, other enthusiastic staff members from the hotels in the vicinity, numerous volunteers from all walks of life who joined the cause including some foreigners who were experiencing the beauty of the country. Each and everybody took part in this event whole heartedly with pure concern for the environmental preservation.

SLT is extending its fullest support and involvement in environmental conservation programmes and utilizing the maximum efforts to prevent ecological pollution around the country and thereby to entrust a safe and sound surrounding to its citizens and the future generation as well. This is one of the many thoughtful acts bequeathed up on the development of the country by SLT.

Loving nature and preserving it for the next generation are identified as the most philanthropical performances which SLT is ready to conduct as a leading organization in the country. SLT is constantly prepared to provide necessary information and carry out awareness programmes on environmental conservation in order to maintain a hygienic and healthy surrounding which becomes the vital ground of becoming an advanced and happy nation.

Awareness campaign posts reached the trusted customers and many others via Facebook. Apart from the social media, several bill boards were displayed in Arugam Bay area to educate and alert on the importance of environmental pollution prevention methods plus the obligations of the general public towards it, together with the beach cleaning event.

Presently, irresponsible garbage disposal has become a threat to the healthy environment of the country. Lack of proper knowledge on waste management harms the nature in the long run. The sea has become the inevitable dumping grounds for divers of litter substances. Thus, the marine pollution has become a critical concern that needs addressing at earliest. Ignorance cannot be an excuse for the ceaseless pollution. Hence, SLT is equipped to take steps forward eliminating the reckless garbage disposal and awareness on the same.

SLT earnestly believe that educating children on these current concerns is mandatory. Consequently, the company launched a special programme for students with the collaboration of 3 or 4 schools from Potuvil area. SLT is delighted to shoulder and conduct such programmes around the country since over two years and this was one of the many school programmes planned and steered in parallel to the beach cleaning event together with the World Water day celebrations on 22nd of March.

The prime responsible telecommunication facilitator, SLT, firmly believes that providing awareness on ICT and along with ICT knowledge creating awareness on water and environmental protection and coaching on the significance of caring natural resources are equally important as sensible, virtuous and thoughtful Sri Lankans.