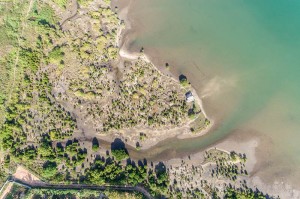 We have in front of us a great opportunity to create awareness on the importance of Mangroves for people and our planet.  Having commemorated the World Wetlands Day on the 2nd of February, this is an opportune moment to raise awareness about the vital role of Mangroves; an important type of wetlands rich with biodiversity.

Mangroves are rich, life-forming, complex biological ecosystems made up of a web of entwined trees, capable of surviving in harsh intertidal environment.  Mangrove trees thrive only in the unique environment near deltas, where freshwater causeways get mixed with highly saline seawater.  A variety of trees, specialised at surviving in arid surroundings marked by sweltering heat, choking mud and extremely briny water, become the birthplace and home to a diverse range of animals and plants.  Their mesh of roots stops river-borne sediments from getting washed out to sea, and their trunks and branches serve as a barricade that reduces the erosive power of waves.  Thus, over generations, new land is formed, earning them the title of ‘land-builders’.

We witnessed firsthand how lives and valuable assets were saved from the Tsunami devastation, in places where the mangrove barrier was strong.  It acted as a wall against incoming waves and getting washed away back into the ocean.  Mangrove forests can also regulate sweeping winds and hurricanes, thus helping to mitigate inland temperature.

Many of the fish species start their lives under the shelter and nourishment of mangrove forests that provide a safe haven.  The dense network of roots creates the ideal breeding ground and ample refuge from hungry predators, while falling leaves provide a nutrient rich food supply.  Mangrove forests are choice nesting grounds for hundreds of migratory birds, and home to various types of reptiles, amphibians, and mammals.  More importantly, as plants that produce an abundance of flowers filled with nectar, Mangroves attract thousands of bees and butterflies that are a critical part of the food chains.

Among thousands, which depend on these habitats, are coastal communities who rely on mangrove environments for commercial activities including fisheries and tourism.  These ecosystems are fast dwindling and are under severe threat, sometimes due to essential development activities and sometimes due to illegal encroachment.  Sustainable management of this complex biodiversity hotspots is essential in order to mitigate the impact of climate change on all living beings on Earth.

Their importance is especially amplified for island nations such as ours, who are faced with the dilemma of having to provide space for an ever-expanding population, while mitigating against the multiple harmful effects of climate change.  It is therefore critically important that everyone of us try to protect the remaining mangrove habitats in each of our capacities.  Furthermore, with Mangrove densities dwindling, what remains has significant conservation value, prompting a sense of urgency to replant and replenish.

In 2012 Tokyo Cement Group initiated a project to replant these destroyed mangrove habitats in collaboration with the Sri Lanka Navy’s Eastern Command.  Sri Lanka Navy plays a pivotal role in the efforts to widen the mangrove cover in the area, and is actively involved in replanting mangroves along, North and North Western coastlines as well.  The project gets the participation of local fishing communities to expand its reach.

The mission started by setting up our own Mangrove nursery within the Trinco Factory premises.  The nursery plants and nurtures 10,000 mangrove seedlings at a given time, belonging to 7 native species, some of which are extremely difficult to propagate under normal conditions.  Replanting of saplings is done according to the natural composition of species native to the Cod Bay habitat, under the guidance of conservation experts.  As the project progressed, we were able to collect and propagate naturally fallen seeds from the initially replanted trees to regenerate the destroyed mangrove forest, within a span of 4-5 years.

The replanting, which began on a 20-Acre stretch of land adjacent to Tokyo Eastern Cement Factory, was expanded across the Trincomalee Bay.  Since inception, the project has planted over 17,000 mangrove plants around the coastal belt around the factory.  This marked a significant milestone for the Tokyo Cement Mangrove Conservation Project, where we celebrated planting over 60,000 mangrove saplings along the coasts of Trincomalee and Mannar, with the assistance of Sri Lanka Navy.  Encouraged by the success with which the mangrove cover is gradually gaining its former glory, the project continues to produce 10,000 new seedlings a year, that gets replanted by the Navy throughout the coasts off the North and East.

Salinda Kandapola, Corporate Manager – Sustainability at Tokyo Cement Company (Lanka) PLC encourages other corporates, individuals and community groups to join in the Mangroves conservation efforts.  Sharing his experience, Salinda mentioned that replanting needs to be done in wetlands that already had a mangrove habitat, to ensure ideal ecological conditions.  It is important not to disturb the natural hydrology of the location as the water level and its salinity are critical success factors for mangrove growth.  Another success factor is to act fast in the replanting process in order to ensure the soil still contains enough nutrients left behind by the former mangrove habitat.  That helps the young saplings establish and adapt faster in its new environment.  Naturally fallen seeds could be collected throughout the year because different varieties bloom during different times of the year, and propagated in a manner to maintain the natural plant composition of a locality.  Mangroves need room to flourish.  Therefore, planting them with adequate spatial distribution enable a healthy growth.  An unwavering commitment to achieve the end result is the most important success factor of Tokyo Cement’s Mangrove Reforestation project, according to Salinda.

The company takes great pride in being a silent warrior in preserving our Mangrove habitats that are essential for our survival.  The Mangrove Reforestation program is among the many sustainability initiatives Tokyo Cement Group is passionately involved in.  They include The Coral Reef Rehabilitation program, where the company collaborates, again, with the Sri Lanka Navy and a few marine conservation groups to bring vitality back to the Coral Reefs of Sri Lanka.  The company’s commitment to social responsibility breathes life through initiatives such as this, by which they successfully integrate social welfare and environmental conservation into its corporate DNA as part of their continuous mission to enrich the country, its people and the environment.