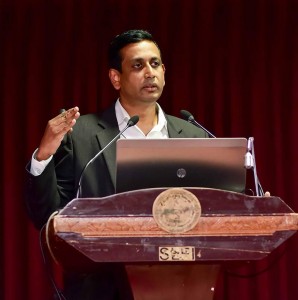 Land scarcity, increasing land prices, and high population density are all decisive factors arguing for condominiums as the solution to Colombo’s growing housing problem. In a speech at the Future of Condominium Living in Sri Lanka seminar held on Wednesday 21 August, Nayana Mawilmada, Sector Head of John Keells Properties agreed. Organized by the Chamber of Construction Industry in Sri Lanka, the conference held at the Sri Lanka Foundation Institute brought together industry experts and professionals to discuss the current shift in the urban housing market.

Following a welcome speech by Secretary General and CEO of the Chamber of Construction Industry (CCI), Eng. Nissanka N. Wijeratne, and an address by Eng. Major Ranjith Gunatilleke, President of CCI and Managing Director at Sanken Construction (Pvt) Ltd., Nayana Mawilmada took to the podium to share some insights on the future of condominium development in Sri Lanka.

Equipped with census statistics, visuals of satellite images, and analysis taken over the course of three decades, Mawilmada was able to identify the driving forces behind the current housing trends. The visuals indicated that there has been a clear migration towards the suburbs as a result of the thinly spread developments across Colombo. With approximately 90% of Colombo residents currently living in single-family detached housing, and only 9% of the city’s developments being over four-stories, the middle-class has progressively been priced out of their own city.

The current dynamic as it stands has led to urban land prices sky-rocketing, with housing prices alone -as a result of consistently rising construction costs- having doubled in just the last decade. Mawilmada stressed in particular on the country’s poorly developed housing finance market, as a major cog in the development machinery. The vicious cycle is such, he says, that young professionals are greater incentivized to invest first in their own mode of transport than a roof above their heads.

The society-urban ills that follow include hours – that accumulate into nearly a decade of your life- spent in traffic, parking spaces taking up nearly 40% of both residential or commercial developments, and children residing in these land-intensive places left with no space to play.

As the dilemma became increasingly obvious, the solution became even more glaringly apparent. Rationally developed condominium style housing is the only sustainable way forward for the expansion of housing in Sri Lanka.

Archt. Philip Weeraratne, Partner at PWA Architects, used the platform to steer the conversation around new trends in condominium developments, reflecting on the evolution of housing in Colombo and how social acceptance of multi-family housing is growing.

Simon Tham, Asst. General Manager of CHEC Port City Colombo (Pvt) Ltd., confirmed this, insisting that projects such as the Port City will have a significant socio-economic impact on the country, and the region as a whole.

Why then, the question was asked, are developers still favoring the high-end high-income bracket over affordable middle-income housing developments in the city, especially in light of all the facts and projections? The panelists together were able to narrow down on two major factors: high construction costs -one of the highest in the region as a result of high taxation-, and a tedious approval process with unaligned building regulations.

Eng. Rohana Wannigama, Director, Capitol Developers Ltd. highlighted the multitude of challenges property developers face in the market, and the need for clear and strong policy support from the government to enable growth of the industry, following which Tissa Perera from the Condominium Management Authority delved into the role of regulatory bodies in the development of these housing projects.

So, while the social forces are indeed quite strong, the powerful economic and regulatory forces too need to align. Mawilmada provided a few key propositions, calling for a fundamentally different approach to urban development strategy.

-      The private sector needs to be consciously stimulated to fill this gap for middle income housing.

-      A clear focus on policy, calling for regulations to be made transparent, simple, and cohesive, will encourage the private sector and all developers to stimulate the right development.

-      In order to reduce the cost of construction -which is one of the highest in Asia- tax incentives need to be given for developers and firms targeting middle-income segments in order to encourage the huge social transformation that is required.

-      The government needs to also take very seriously the release of lands in the middle of the city, specifically for middle income housing and do that in a rational, measured way.

-      A consciousness of the economics of the industry is vital, one that encourages competition among developers and construction firms at all levels.

To sum up, the highest priority of policy focus should be on stimulating the development of condominium housing, built, developed and sold at price points that are accessible to a much broader swathe of the population. The private sector is clearly the best positioned to deliver on this simply because one size fits all mass housing developments will never work for the middle class. People need to be given the freedom of choice, and for that markets should be allowed to operate and innovate.

If the government resists the temptation to be the builder and serves instead as the enabler the private sector can step up and create a policy environment that is stable and progressive; one that encourages and stimulates potential home owners with the right incentives.

Following a Q&A session, the guest speakers concluded the forum by reiterating how enabling access to high-quality, middle-income urban housing can have a transformative impact on this country, on all its people and the economy at large, both on a social as well as an economical level.

Dr. Hans Wijayasuriya to deliver keynote address at 165th AGM of the Planters’ Association of Ceylon

SLPA in collaboration with the JCT, SAGT and CICT holds the 2nd Port of Colombo Awards