The Prima Group, in partnership with Sri Lanka Cricket, has made all plans to commence the Prima Champions Cup 2015, Under 15 Inter-district and inter provincial Tournaments for the 9th consecutive year. The press conference was held at the SLC headquarters on 26th August, 2015 with the participation of all senior officials from SLC and Prima Group.

The tournament commencing on the 1st September 2015will allow the participation of over 800 players from all around the country including the North &East. 32teams will compete against each other and best players from these district teams will be selected for the provincial teams. 10 provincial teams will then compete for the ProvincialChampionship. Also, there are five teams participating from Northern Province representing -Jaffna, Mannar, Vavniya,Mulativand Kilinochchi.

At a recent press conference held to announce the commencement of this year’s tournament, Mr.Shun Tien, General Manager, Ceylon Agro Industries (Prima Group Sri Lanka) confirmedthe renewed partnership with SLC. “Having successfully conducted this tournament for 8 consecutive years with tremendous results, weproudly continue with the 9th consecutive year of this effort to develop junior cricket with the renewal of our great partnership with SLC”

Saying that all plans have been finalized for an inspiring tournament,Mr.Shun thanked SLC for giving the Prima Group theopportunity.

“We wish to extend our gratitude to Sri Lanka Cricket for allowing us this opportunityto continue our valued partnership and for all the support provided in making Prima Champions Cup a successful tournament that makes a positive contribution towards uplifting junior cricket in Sri Lanka.

Mr.Sajith Gunaratne, Senior Business & Senior Marketing Manager, Ceylon Agro Industries (Prima Group Sri Lanka)briefed the press on the format of this year’s tournament and also added“Our commitment to develop junior cricket in Sri Lanka will go beyond this tournament. As always Prima will provide all teams with total nutrition and cricket gear while  they receive professional guidance from SLC coaches, thus ensuring their mental and physical development during the tournament and onwards”

Prima Champions Cup under 15 District and Provincial Cricket tournaments will undoubtedly help the young cricketers gain their confidence and experience in the coming years. With view to showcase their cricketing talent these matches will receive extensive TV coverage while the final match will be telecast on TV. 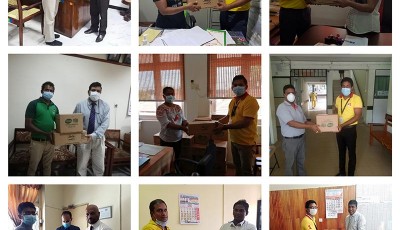