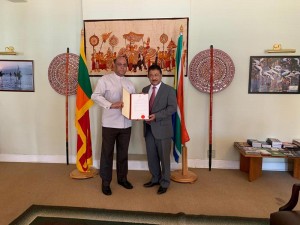 During the meeting, the High Commissioner highlighted the important roles that the Honorary Consul should play in developing the bilateral relations between Sri Lanka and Botswana, and to promote trade and tourism of Sri Lanka in the country. The High Commissioner further advised the newly appointed Honorary Consul to work hard for the well-being of the Sri Lankans living in Botswana and for enhancing Sri Lanka’s image.

The newly appointed Honorary Consul pledged that he would work closely with the High Commission and assist the Mission to develop relations between Sri Lanka and Botswana, and to promote Sri Lanka’s trade and business in Botswana.

SLPA in collaboration with the JCT, SAGT and CICT holds the 2nd Port of Colombo Awards