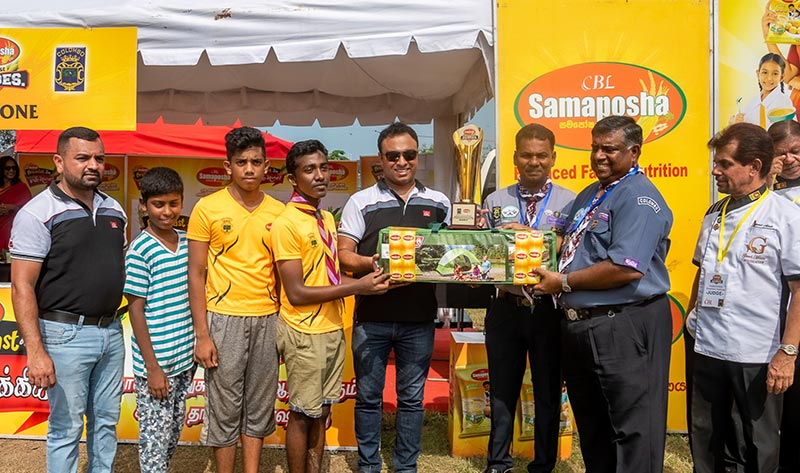 The gold trophy and gifts being awarded to the scouts of Al-Hidaya National, by Jayanga Perera, General Manager, Marketing, CBL Food Cluster and the District Commissioner of the Colombo District Scout Association, Suren Wikkramatilleke

CBL Samaposha, in working towards empowering a future led by young leaders upholding good morals and understanding the importance of advocating a healthy breakfast, offered the young scouts at the 54th Colombo District Scout Annual Camporee, the opportunity to truly understand and appreciate the importance of cultivating good values in their lives. This has been in line with the healthy breakfast movement initiated by Samaposha which has grown in momentum and reach in the past one and a half years, advocating the message on the importance of a nutritious start to the day.

The five-day camporee took place at Hindu College grounds, Rathmalana and overlooked 2500 scouts participating from over 45 schools in Colombo along with 2000 cub scouts ranging from ages seven to ten, and for the first time ever, over 750 singithi scouts, ranging from ages five to seven attending the 54th annual camporee. Jayanga Perera, General Manager, Marketing, CBL Food Cluster, stated, “We are excited to be a part of the camporee and be able to support an event of this nature by imparting a positive and thought provoking message on the importance of a balanced and healthy breakfast to a forum of both young and old. A message that holds true value which can be proudly carried on to society.”

The days’ highlights brought on eager smiles from cubs and older scouts as they came together to write special messages expressing noble values on the Samaposha “Good Values” message wall. Many adults were observed to smile or discreetly wipe happy tears as they read thoughtful statements such as, “We should protect our environment”, “Help those in need”, and “We should look after the weak”.    The parents were not allowed to feel left out as they were given the opportunity to attend a session with a nutritionist and participate a demo done by nutritional experts from CBL Samaposha, on creative ways of using samaposha in their breakfast meals.

The District Commissioner of the Colombo District Scout Association, Suren Wikkramatilleke stated “It has been a privilege to have CBL Samaposha, a brand that propagates the value of healthy breakfast as our main sponsor and our scouts have gained immense value through the messages and activities driven by them.”

The main pinnacle of the camporee however, was the unique and inaugural contest that took place amongst all 45 Scout troops. Each troop registered a breakfast team of ten scouts and was required to prepare a balanced and healthy breakfast meal for their troops and present the dish for the competition. The competition was judged by four esteemed chefs from Chef’s Guild of Lanka; Chef Gerard Mendis, Chef Tilak Seneviratne, Chef Madhawa Weerabadhdane and Chef Wimal Wimalagoonaratna. Their valuable advice and encouragement given to the young scouts were of immeasurable value and further helped to establish the nutritious value of a good breakfast meal. These dishes were evaluated on its nutritional value, inclusion of all components such as protein, vitamins, carbohydrates etc. for a balanced meal, Samaposha used as a main ingredient in a creative manner and the visual presentation.

The eager teams along with their troops cheering from the side lines were true breakfast heroes as they displayed teamwork, strong morals in supporting each other and other competing teams and surprising everyone on their knowledge of cooking a balanced and nutritious breakfast that children would also love to eat. 10 teams were selected for the best dishes and the first, second and third place was awarded to Al-Hidaya National, Wesley College and St. Andrews College, in that order. Each team member was also awarded with a certificate for their participation and contribution to the challenge.

These young leaders of tomorrow then united together after the competition to pledge in carrying forth the message of the importance of healthy values to their peers along with the value of a healthy breakfast to their families and society.

The camporee ended on a high note in which scout and parent alike took away the sincere appreciation in understanding how a healthy breakfast would support a child’s physical development whilst healthy values help form tomorrow’s leaders.

Consumers approve FADNA Shape Up Tea for a healthy lifestyle