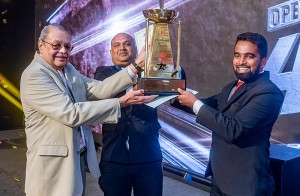 The key objective of the annual event was to appreciate the dedication and contribution of the company’s field sales force and top sales performers towards the growth of the organisation during the previous financial year. The event was held with the participation of the Board of Directors, CEOs, field sales management and personnel of CBL.

The previous financial year showcased CBL’s position as an undisputed market leader in the many categories it operates in, making it one of the most successful Sri Lankan food manufacturing companies. It  was  also revealed  that  the brands  of the company  including  Munchee, Ritzbury, Lankasoy and Samaposha   have been able  to  consolidate the leadership position through significant increases in  market share.  These achievements were highlighted and commended during the awards ceremony.

The key highlight of the event was honouring the field sales force and top sales performers for their contribution towards CBL’s success in achieving set sales targets for the financial year 2018 – 2019. The prestigious CBL Sales Star award was jointly awarded to Sarath Rupasinghe, Territory Sales Officer of Nikaweratiya for Ritzbury Chocolates & Tiara Cakes and Thangaraj Dharshan, Territory Sales Officer of Pettah for Lankasoy and Samaposha in recognition of their overall outstanding performance. They received the “CBL Star Award” from Ramya Wickramasingha, Group Chairman of Ceylon Biscuits Limited.

Sarath Rupasinghe  of   Nikaweratiya  Territory was also  the winner of Senior Star Award  competition  held  among  Territory Sales Officers of  Chocolate  and  Cake  Sales Team while Randika Umayanga of  Puttalam Territory  and  Salinda Wickramanayake  of  Pettah  Territory won the  1st and  2nd  runners up  respectively.

Chathura Manawadu from Welimada was the winner of Senior Star Award competition among members of the Munchee Biscuits Sales Team with S.A. Manjula from Haliela winning 1st runner-up and M.G. Danushka Kumara from Borella as 2nd runner-up.

Territory Sales officers with service period of 1-2 years are evaluated under the Junior Star Awards Competition.

The Junior Star Awards winner title was presented to Rajendran Kirijan of Mannar Territory handling Munchee Biscuit Sales with 1st runner-up awarded to Mohamed Imran from Dankotuwa who is a member of Ritzbury Chocolate and Tiara Sales Team and the 2nd runner-up awarded to Nirmaldev Akilan of Nelliady from the Lankasoy, Samaposha and Sera Sales Team.

The top performers of the CBL Sales Team were also recognized and awarded with promotions and overseas tours.

The value of Insurance and spreading awareness