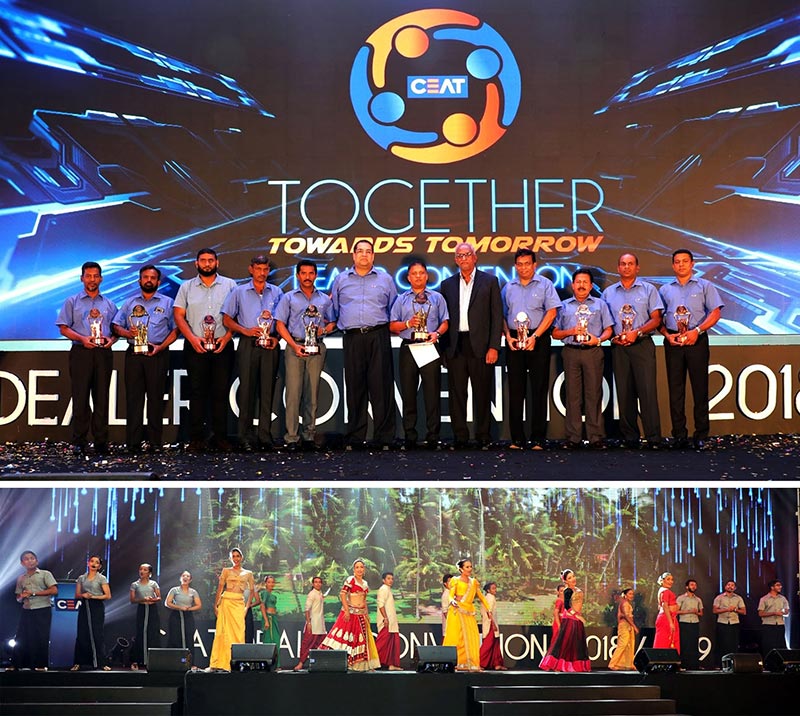 CEAT Kelani’s top 10 dealers for 2018-19 with the Company’s Executive Director Mr Rohan Fernando and Managing Director Mr Ravi Dadlani (5th and 7th from right respectively) and (Below) a unity-themed dance sequence at the awards gala.

The importance of unity in times of economic or political adversity was the emotive refrain when top tyre maker CEAT Kelani Holdings honoured the Company’s elite dealers at a scintillating awards gala at the Shangri La Hotel in Hambantota recently.

Themed ‘Together Towards Tomorrow’ the event saw 70 of CEAT’s top 150 dealers who attended receiving awards for their contributions to the Company’s revenue in 2018-19, a year of substantial investments in new product development, capacity enhancement and product improvement for the India-Sri Lanka joint venture.

CEAT Kelani Managing Director Mr Ravi Dadlani told dealers at the event that the Company’s achievement of three per cent growth in the domestic market in the year concluded could be considered an equitable performance in the context of the challenges faced by the business sector and the country as a whole. “All of us are going through tough times, and it is in times like this that we must work closely together to overcome the challenges,” he said.

He said the Company’s courageous decision to go ahead, despite the temporary setbacks in the economy and the depressed outlook in the market, with planned investments of Rs 3 billion to move in to new product categories like Truck Bus Radials (TBRs), double production capacity in motorcycle tyres and Passenger Car Radials (PCRs) and to upgrade production techniques and processes, had enabled CEAT Kelani Holdings to increase its market shares across all product categories and outperform the competition.

The full impact of the investments made in 2018-19 would begin to be seen in the current financial year, Mr Dadlani added, calling for the continued support and loyalty of dealers and their families as they work with the CEAT brand “together towards tomorrow.”

Top dealers honoured for their contribution to the CEAT brand’s growth in 2018-19 received cash awards, trophies and certificates in recognition of their performances in each of the product categories that CEAT manufactures, as well for overall excellence. They also had an opportunity to win vouchers for gold jewellery through raffle draws conducted during the proceedings.