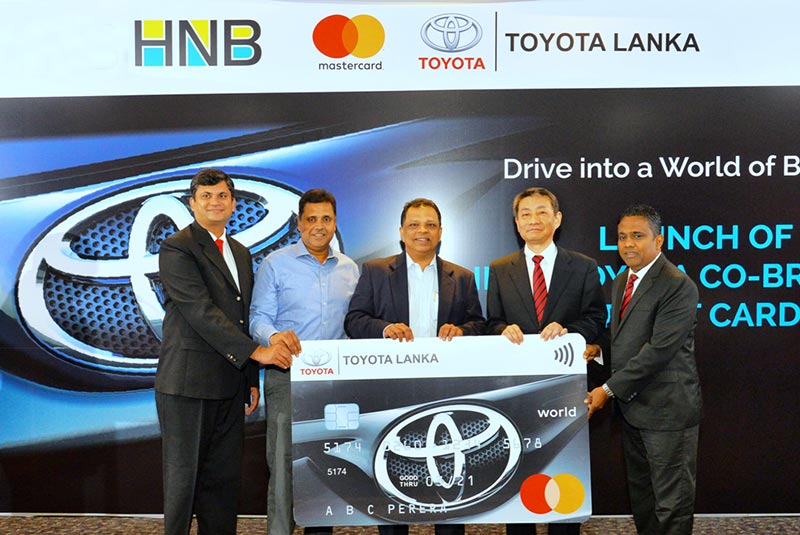 Sri Lanka’s most awarded bank, HNB PLC, announced another landmark partnership with the island’s leading automotive giant, Toyota Lanka, to launch a unique co-branded credit card packed with a host of special benefits to reward their sizeable base of mutual customers.

All of HNB’s Toyota co-branded cardholders will gain lifetime annual fee waiver based on a monthly spend of more than Rs.25,000 or Rs.300,000 annually. In addition, cardholders will also be eligible for a 10% discount on all genuine Toyota spare parts and motor oils in services as well as all mechanical repairs and purchases from Toyota Services Centres and Spare Parts outlets.

These deals will also be clubbed with a host of other offers for the co-branded cardholders including up to 100% off on cardholder air tickets and 20% off on Hotel Bookings made through Findmyfare.com. Additionally, cardholders will also be eligible for a special 5% discount on online purchases made from WOW.lk, with a maximum discount of Rs. 10,000 per transaction. All HNB card-related deals and promotions will also be open to HNB Toyoyta Co-branded credit cardholders

“Toyota is a brand that is globally synonymous with precision engineering, quality, and focused innovation. Locally too Toyota holds a special place in the heart of Sri Lankans, and much like HNB, it remains one of the most popular brands for those seeking optimal value for their investment.

“Given that HNB also caters to the needs of one of the largest customer bases in the banking industry, there is naturally a great deal of overlap between HNB and Toyota, and that is why we are excited to announce this momentous partnership. We always aim to provide our customers with the best possible value. With the Toyota-HNB co-branded card we have really delivered on this promise,” HNB Deputy General Manager, Sanjay Wijemanne said.

In addition to the offers for co-branded cardholders, HNB Leasing and Personal Loan customers will also be able to take advantage of the bank’s ground breaking partnership with Toyota. Clients who purchase brand new Toyota vehicles utilizing a loan or leasing facility from HNB will be entitled to 50% off on motor insurance for the first year.

Moreover, HNB Leasing and Personal Loan customers will have their rewards maximized in the form of a warranty for either a 3-year period or on the first 100,000 km on new vehicles, as well as three free vehicle services – including costs for labour, spare parts and other equipment – at 1000km, 5000km, and 10,000km/

The loans and leasing facilities offered by HNB for Toyota vehicles will be coupled with highly attractive interest rates. Customers upon purchase of a new Toyota vehicle will also be able to avail themselves of free vehicle registration from Toyota Co. Notably, a 50% residual will also be considered from lease value, in addition to an unprecedented 100% interest rebate on early settlements of leases with HNB.

HNB was adjudged ‘Best Managed Bank in Sri Lanka’ by the prestigious Asian Banker Magazine while the Bank’s Managing Director/CEO, Jonathan Alles was also conferred with Asian Banker ‘CEO Leadership Achievement’ award in addition to being declared ‘Sri Lanka’s Best Bank’ for 2019 by Euromoney Magazine for the third time, and being ranked first among Sri Lankan banks in its ranking among the Global Top 1000 Banks by the prestigious UK-based, Banker magazine.

Operating through 251 customer centres across the country, HNB is one of Sri Lanka’s largest and most innovative banks, having won recognition from numerous international and local institutions for its achievement of excellence in diverse fields. HNB was also the first Sri Lankan bank to obtain an international credit rating and was assigned a foreign currency issuer rating of B1 on par with the sovereign rating by Moody’s Investors Service, while it has a national long term rating of AA- (lka) by Fitch Ratings (Lanka) Ltd

Insurance industry gathers together to spread the message of protection