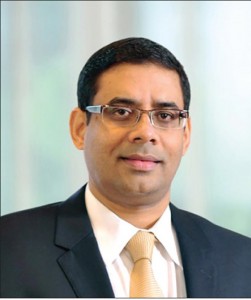 Hatton National Bank PLC (HNB) continued to demonstrate resilience, reporting a profit before tax of Rs 8.3 Bn and a profit after tax (PAT) of Rs 4.8 Bn for the first half of 2019. The group PAT for the period was Rs 5.1 Bn.

The Bank’s robust business model coupled with prudent asset and liability management, enabled HNB to post stable results from its core banking operations despite a slowdown in balance sheet growth. Net interest income (NII) for the first six months of 2019 grew by 17.9% YoY to Rs 25.9 Bn. Fee and Commission income which HNB derives from diverse sources complimented NII and at Rs

4.4 Bn accounted for nearly 15% of the total operating income of the Bank.

An appreciating Rupee led to translation losses on foreign currency denominated long positions and FCBU earnings; this being the main reason for the Bank booking exchange losses of Rs 577.2 Mn during the first half. In comparison, a substantial exchange gain of Rs 895.5 Mn was reported for the corresponding period ending June 2018.

Chairman of HNB, Dinesh Weerakkody commented that “The economy despite the many challenges appears to be recovering sooner than expected post 21/4. The CBSL had little choice but to effect lending and deposit rate cuts and has been fortunate that the US Fed did the same shortly after. Global investor appetite for Lankan sovereign debt appears to be intact, the outlook for equities has improved slightly and tourist arrivals are returning to normalcy. Whether sentiment and indicators eventually translate to growth remains to be seen however, as uncertainty and relatively low business confidence have not abated completely.”

Commenting on the Bank’s performance MD/CEO Jonathan Alles stated that “Over the past few quarters the banking sector has been experiencing the effects of multiple challenges. Sluggish GDP growth, high interest rates and stressed operating conditions within the Agriculture and Construction sectors have collectively served to impede collections for banks and led to surging NPA’s across the industry. Pressure on asset quality coincided with banks having to grapple with higher capital requirements imposed by BASEL III while also having to incur higher taxation on account of the imposition of Debt Repayment Levy, a position exacerbated by the unfortunate incident of 21st April. Nevertheless, in this backdrop HNB has once again demonstrated resilience, proactively revisited our processes, setting up a dedicated vertical to specialize in underwriting; concurrent to other initiatives to entrench an outstanding credit and compliance culture. The unwavering focus on improving asset quality has enabled the Bank to record a drop in its total NPA base in June, despite the industry experiencing a reverse trend. This is ample proof of the viability of our business model, the commitment and dedication of our team and the timely action taken by the Bank. Being a true partner in progress, the Bank has also gone a step further, extending support to many clients in distress through moratoriums and re-schedulements. We strongly believe that  the situation would improve in the coming months, as we begin to witness signs of recovery as the Country moves forward.”

Mr. Alles further added that: “In line with the transformational journey of the Bank, in May 2019, HNB launched ‘SOLO’ the payment app, which is the highlight among digitization initiatives during the first half of the year. While SOLO would see improvements being offered in the near future, initiatives are underway to revolutionize and reshape the financial services industry of Sri Lanka which will deliver unprecedented levels of convenience and increase in availability of banking channels.”

All Group companies were similarly resilient in their second quarter performance and contributed  to Group PBT of Rs 9 Bn. The Group PAT of Rs 5.1 Bn included the Q2 profit of Rs 3.1 Bn, an increase of 52% QoQ. Rs 7.8 Bn was paid as total Group taxes while at Bank level, total taxes of Rs 7.2 Bn was paid during the first half of 2019.

HNB has been richly awarded in the first half of 2019, being adjudged as the Best Bank in Sri Lanka by the prestigious Euromoney magazine for the third time in the Bank’s history. The Asian Banker Magazine bestowed upon HNB the award of ‘Best Managed Bank in Sri Lanka’ concurrent to MD/CEO Jonathan Alles being awarded the ‘CEO leadership achievement award’ for achievements between 2016 to 2018. Earlier in the year the Bank was recognized by the Asian Banker as the Best Bank for SME in Sri Lanka by the Asian Banker while Asiamoney awarded HNB as the ‘Best Bank’ for SME, Trade Finance, Cash Management and Corporate Social Responsibility.

HNB is the first local Bank in Sri Lanka to receive an international rating on par with the sovereign from Moody’s Investor Services and has a national long term rating of AA -(lka) from Fitch Ratings. The Bank is also ranked amongst the ‘Top 1000 World banks’ as published by the prestigious Banker Magazine UK, a recognition bestowed upon HNB since 2017.