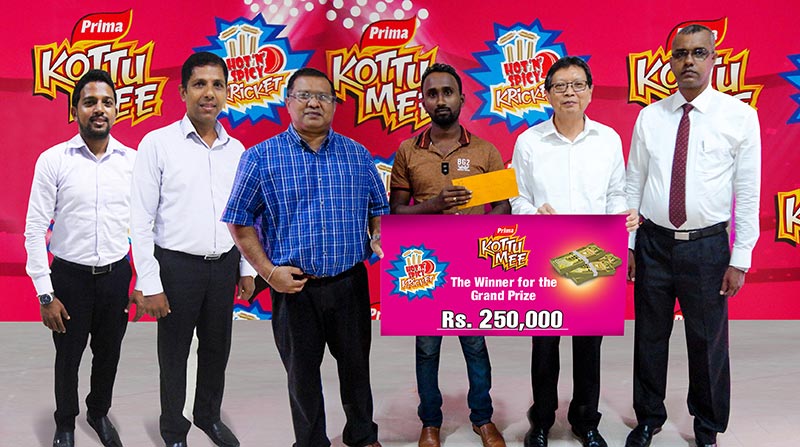 Prima KottuMee recently concluded the ‘Hot N Spicy Kricket’ promotion for the year 2019. This year the promotion was in play for not one, but two whole months in order to award the brand’s loyal customers. Beginning on the 1st of June and ending on the 31st of July, the promotion brought with it the chance for fans all across the island to win awesome prizes on a daily, weekly and monthly basis. The promotion was held concurrently with the Cricket World Cup, thus adding a touch of the KottuMee spice to the excitement.

Consumers were required to SMS the unique code found inside each packet of Prima KottuMee, to 2343 in order to stand a chance to win amazing prizes. This resulted the accumulation of more SMSs than ever expected, as fans were extremely eager to join in the fun. Three daily winners were selected throughout the 2 months to win Smart Watches (Fitness Bands) while the two weekly winners receivedSamsung smartphones. Eight more lucky weekly winners walked away with a cash prize of Rs. 50,000/- each. The Grand Winner who received a handsome cash prize of Rs. 250,000/- was D. R Kasun Malinda Suriyawansa from Aranayake.

Prima KottuMee’s fun loving nature continuously makes the ‘Hot N Spicy Kricket’ promotion successful throughout the country every year, proving that the brand is loved in every corner of Sri Lanka.