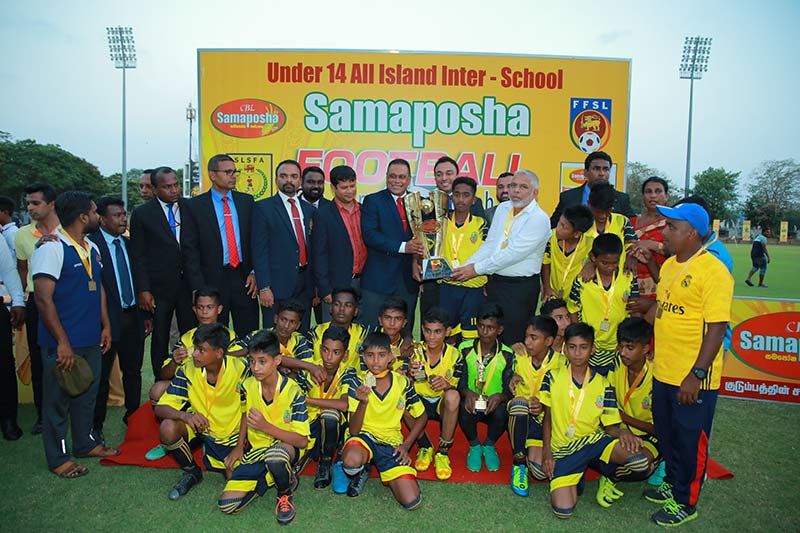 CBL Samaposha, proud sponsors of the Under 14 Inter School Football Championship for the 11th consecutive year held the award ceremony on the 11th of March at Race Course International Grounds.  The championship matches had over 12,000 eager participants from over 500 Schools across the length and breadth of the country competing to grasp the coveted trophy.  33 boys’ teams and 25 girl’s teams who scored high at District Level participated in the qualifying matches held from 2nd to 4th March at the Mahiyanganaya Pradeshiya Sabha grounds with the final round held at Colombo Race Course International Grounds.

Mahajana College in Jaffna claimed victory at the Girl’s Championship match by scoring 5:4 on the penalty rounds against Bendiwewa Maha Vidyalaya, Polonnaruwa. This intense game was initially called to a draw before proceeding to the penalty round. Kavisigamuwa Gamini Central College in Kurunegala was awarded third place. The Best Player from the Girls Teams was Yashodara Layanaika while the Best Goalkeeper from the Girls Teams was Yogendran Renshana. Both girls are from Mahajana College, Jaffna, the winning team.

Commenting on the championship, Shammi Karunaratne, Director/CEO of Plenty Foods stated, “It has been our immense pleasure to sponsor the under 14 interschool Football Championship for the eleventh successive year and we are pleased to congratulate this year’s champions on their excellent performances. Samaposha has consistently contributed towards the development of school’s football for over a decade and we hope to continue inspiring the nation’s youth to achieve excellence while promoting the importance of a healthy breakfast ensuring good health and fitness.”

Hemantha Abeykoon, Assistant Director in charge of Physical Education and Sports in the North Central Province, commented “The contribution made by CBL Samaposha in uplifting sports in Sri Lanka is greatly appreciated as we see how these efforts have developed the growth of these students, many who have even gone on to become national football players. Their commitment and dedication has been an integral part of developing the next generation of future leaders.”

Samaposha is the flagship brand of Plenty Foods (PVT) Ltd, a fully owned subsidiary of CBL Group, one of the largest FMCG conglomerates operating mostly within the food sector in Sri Lanka with a brand presence spread over 60 countries around the world. The company has grown to become a market leader and a dominant player in every sector it operates in. CBL group as a local corporate has earned much respect throughout the years for its caring approach towards all its stakeholders. 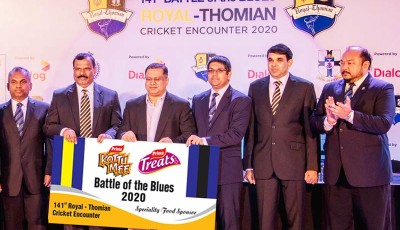 Prima KottuMee, the fun loving youthful brand came on board to support the 141st Royal – Thomian Big Match as the Specialty Food Partner. Having