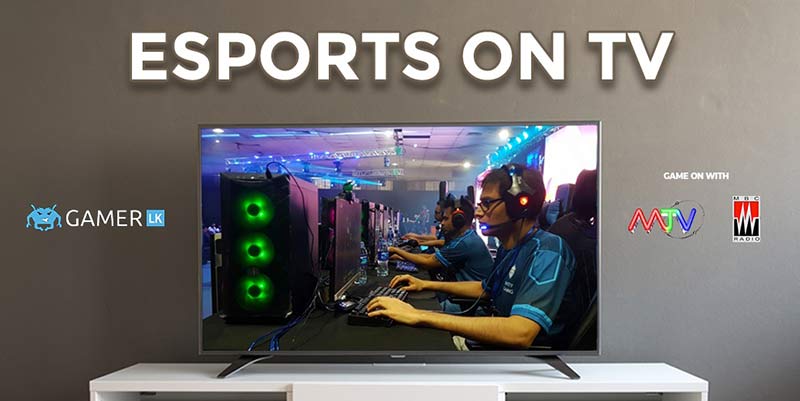 Gamer.LK in partnership with Maharaja Television (MTV) and Maharaja Broadcasting Corporation (MBC) will be taking Esports to television for the first time in Sri Lanka. The TV deal will commence with the Inter-University Esports Championship happening in June and continue for Gamer.LK’s bigger events scheduled throughout the year.

The partnership brings Gamer.LK’s Esports and digital entertainment expertise with MTV/MBC’s traditional media experience to position what is currently the fastest growing sport in Sri Lanka to a large television audience. The Inter-University Esports Championship is slated to be one of the most-watched youth-events during the period.

The Inter-University event will be held on the 1st and 2nd June at Stein Studios, where over 40 universities are expected to take part in the qualifier. The top 2 performing universities will qualify for a grand-finals held on the 15th June.

“We’re excited to bring Esports to television audiences in Sri Lanka, and are happy that MTV/MBC recognised the potential of the growing Esports scene in the country. Sri Lankans use both traditional media and digital to watch content that they love, and being able to position Esports on both mediums fits perfectly in our strategy to take Esports to the masses.” said Raveen Wijayatilake, CEO of Gamer.LK

With coverage on both traditional media and digital media, brands have a unique opportunity to reach a dedicated millennial demographic that is normally hard to reach. Globally, audiences between 18-35 are watching more Video Game content and less traditional sports, which is a trend being seen in Sri Lanka as well.

“As Sri Lankas leading media network we have recognised the exciting developments across Esports and mobile. These new disruptive developments across the industry gives us the opportunity to enter the arena with Gamer.LK and support this industry. Being future focused we are confident this collaboration will enhance its accessibility and interest among a wider audience segment.” – Nedra Weerasinghe – Group Director Electronic Media Business MTV/MBC