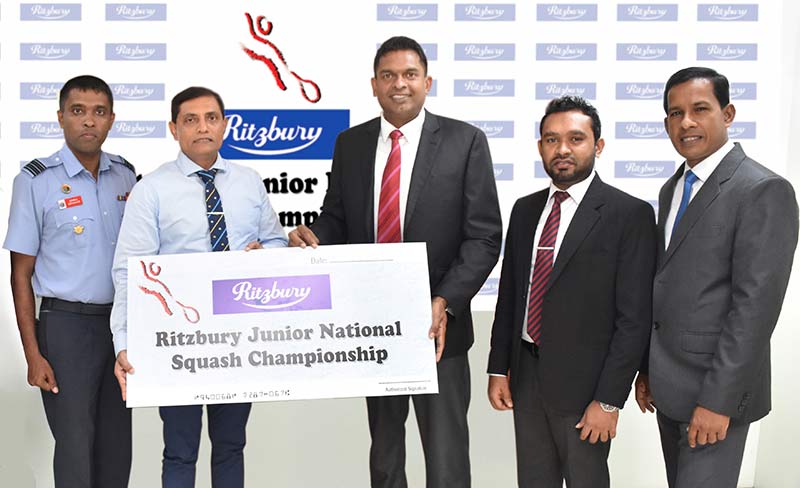 Showcasing the company’s resolute commitment in developing and promoting squash nationwide, Riztbury has continuously partnered the Championship for 12 consecutive years.

Nilupul de Silva, General Manager Marketing, CBL Foods International (Pvt) Ltd, said, “We support many sports such as athletics, swimming and rugby. We have cultivated a special relationship in promoting squash for over a decade and are pleased at the pace the sport has progressed. Several talented players have now emerged from various zones in the country. Our future goal is to ensure squash is promoted district wise enabling more participation from players. This year too, Ritzbury has extended our support towards the ‘30th Ritzbury Junior National Squash Championship’ and we look forward to enthusiastic participation from the players.”

Recognised as a major event in the game’s annual calendar, over 400 players representing schools including the top ranked junior players are expected to participate in this championship.

The finals of the Under-19 is scheduled to take place on 16 October 2019 at the Ratmalana Air Force Squash Courts and the Championship awards ceremony will take place soon after.

Expressing his views, on this year’s Championship, Air Commodore (Rtd) Ajith Abeysekera, President of Sri Lanka Squash said, “As a local entity, we are appreciative of Ritzbury’s unstained support extended towards developing squash for 12 years consecutively. Additionally the undertaking by Ritzbury to promote and encourage squash outside Colombo is also commendable. Their assistance over the years and towards the further progress of the sport has been vital in raising the profile of the game in the country.”

Details of the draw can be obtained from www.srilankasquash.com or from the SLS Secretariat, and further information on the Championship is available via Ritzbury’s Sports Facebook page  ‘Ritzbury Support’ https://www.facebook.com/RitzburySupport/