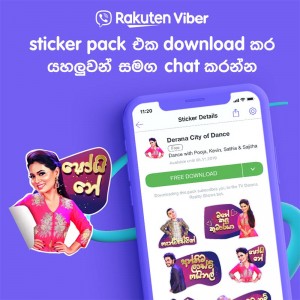 The Viber Bots’ dynamic nature has created more excitement amongst the TV show fans. It not only allows them voting capabilities for their favorite performances but some of the interesting comments from the fans are also televised live on-air.

To engage with the Viber BOT, fans of the reality show must download the customized sticker pack of ‘Derana City of Dance and through a deep link they will be able to interact freely with the BOT on a regular basis. During the first week alone, it managed to attract 145,000 users and around approximately 40,000 subscribers to the BOT.

Speaking of this partnership, Viber spokesperson Anubhav Nayyar said “     Viber has always embraced new technologies and with every partnership we not only strive to deliver custom made solutions to our partners but also aim to enhance our user experience on the platform. It’s been very encouraging to witness the popularity of the Derana Dream Star BOT on Viber and we hope to continue delivering many such engaging experiences on our platform”.

Known as the premium entertainment channel- TV Derana and home for many popular reality shows, enjoys tremendous local fan base. As a part of their promotion strategy, the channel has been actively using social media platforms to create awareness of their sticker packs and Viber BOT. Within the initial launch of the partnership, it has witnessed tremendous response from its viewers and hence have decided to add more upcoming reality shows to the BOT, aiming of attaining similar engagement from the users.

These supplementary sticker packs include major celebrities in Sri Lanka such as Pooja Umashanker, Sathish Hettithanthri, Sajith Anthony and Kevin Nugara who are featured in the reality show. The Derana City of Dance sticker pack was on launched 05th August, followed with a pack on the ‘Derana Battle of the Bands’. The sticker partnership for each campaign will be carried out for a period of three months while the BOT will be used throughout.

At Rakuten Viber, we connect people. No matter who they are, or where they are from. Our global user base has access to a range of features like one-on-one chats, video calls, group messaging, and updates and discussions with their favorite brands and celebrities. We ensure our users have a secure and free environment to share their emotions.

Rakuten Viber is part of Rakuten Inc., a world leader in e-commerce and financial services. It is the official communication channel of FC Barcelona, and the official instant messaging and calling app partner of the Golden State Warriors.