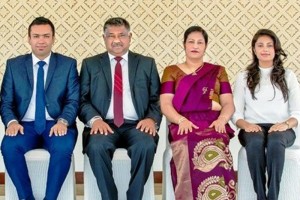 The Golden Hospitality (Pvt) Ltd., a brainchild of the group’s Chairman, needed an enhancement with an elegant Five Star property in the portfolio. Subsequent to making a name in the hospitality industry since 2003, the brand caught on with The Serene in Kandy, and 2 bungalows in Nuwara Eliya. After selecting an out of the way village area, Chairman, Mr. Sriyananda Wijekoon acquired a property in Ampitiya, Kandy and proceeded to outline his plan. The fruition of The Golden Crown was a gem for the whole village. Suppliers were sourced locally and the real estate in the area became enhanced in value. A project in the making for over 4 decades, the few kilometers of road from the Lake Round in Kandy was considered a necessary access road and repairs began in earnest. The many staff from in and around the surroundings found lucrative employment, conveniently accessible without going through Kandy town.

In November 2017, without much fanfare, the President, Hon. Maithreepala Sirisena declared open the sophisticated and tasteful five star property, The Golden Crown Hotel, with many amenities. People coveted holding their functions in the fully fledged banquet halls. The many events held by The Golden Crown subsequently were well thought out and inviting for the discerning residents of Kandy with appropriate entertainment. Patronage of the property became all the rage in Kandy and surroundings. After winning the Gold Award for the Extra Large Category of Central Province at the Entrepreneur of the Year Awards Ceremony organized by the Federation of Chambers of Commerce and Industries in Sri Lanka (FCCISL) in March, 2019, the Board of Directors comprising Mr. Wijekoon, his son Chanuka Wijekoon, the Managing Director and daughter Hansani Wijekoon, the Finance Director, decided to establish more credence by obtaining Five Star rating for the property. All that was needed for this accreditation was to improve a few ad-hoc areas.  By July 2019, the Golden Crown was awarded Five Star status and celebrated the achievement by saluting the employees who made it possible. It was a notch in the belt of this entrepreneurial family who had a vision to make a reality of their dreams while supporting the community with their commitment to ensure economic sustainability of the market.

Currently, comprising of 6 properties from Three Star to Super Luxury Boutique Hotels in Kandy and Nuwara Eliya, The Golden Hospitality (Pvt) Ltd has now rolled out further expansion plans. The Golden Crown Kandy, will expand, with a new wing, adding 50 luxury bed rooms in an adjacent property. It too will comprise the Kandyan motifs from Degaldoruwa carvings and Embekka type traditional decor. Artfully designed to provide the guest with a memorable experience and set amidst verdant paddy fields, surrounded by lush greenery on the hillsides with a view of the Dunumadalawa Forest which contains the main water source for Kandy, The Golden Crown Hotel will enhance its facilities beyond expectation with this expansion. There will be a large pool, in addition to the existing infinity pool, restaurants with fine dining options and a Pub/Restaurant similar to Nuwara Eliya called The Sackville Restaurant and Bar, while the guests will continue to have access to the banquet halls including the Grand Ballroom, Windsor Court and Crown Court as well as to the current BRIX restaurant, TREATS coffee shop, Gym and Laama Spa.

Emirates A380 touches down in Cairo