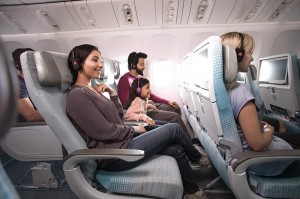 Emirates carried approximately 16 million passengers over summer, from June to August, and 75% of these customers highly rated their inflight entertainment experience –according to Emirates’ inflight survey. With an entertainment catalogue that boasts up to 4,500 channels, customers are spoilt for choice and for the first time Emirates reveals its most popular channels on board.

Ice, Emirates’ inflight entertainment system, offers up to 1,500 movies from all genres and in 44 languages but Superhero films were the clear choice over summer as Emirates included a suite of movies from Japanese manga, the Marvel Studios and the DC universe. In June, the most popular movie watched on board was Captain Marvel. Alita: Battle Angel took the top spot in July, while Avengers: End Game was the most watched movie in August.

The ice catalogue is updated monthly with approximately 100 new movies from around the world as well as music, TV shows and documentaries. To help customers plan their trip more effectively Emirates introduced an innovative new function on its app to allow customers to browse the expansive entertainment catalogue, create bespoke playlists ahead of their flight and then sync it to their seats once on board. Over summer, more than 40,000 unique playlists were created by travellers and the viewing choices are clear when on board – every playlist included at least 1 movie proving Emirates customers were clear film buffs. 1 in 6 customers added a TV show to their personal playlist.

Bollywood movies are the most popular non-English language films on board. In terms of film categories, the most popular choices were a varied spread with most viewers opting for “New Movies” which included hits like A Star is Born and Bohemian Rhapsody over summer; followed by Disney classics – a selection of 50 Disney hits ranging from 1951 classic Alice in Wonderland to this year’s Aladdin. The third most popular category across all sectors and regions was Bollywood films and over summer, customers enjoyed hits like 2.0 and classics like Dabangg 2.

Those looking for other options could choose from over 1,200 hours of TV programming. In the last 3 months, the Emmy award-winning series Chernobyl from HBO was the most watched TV show on ice, while the most watched documentary was African Cats, a 2011 nature documentary film about a pride of lions and a family of cheetahs trying to survive in the African savannah.

Emirates ensures its youngest customers are catered for with a large selection of children’s movies and TV channels and the most popular kid’s show was Paw Patrol.

Ice also features varied content such as Emirates’ own Food and Wine Channels giving customers a behind-the-scenes look at how it creates its onboard menus; expert-led LinkedIn Learning courses; as well as offering uTalk language lessons for beginners. The most popular language studied on board was Arabic.

Emirates’ entire fleet is Wi-Fi enabled and Emirates provides free Wi-Fi across all classes – a choice of 20MB complimentary data to use on any app or 2 hours of unlimited text messaging on popular messaging apps. More than 1 million passengers logged on to Wi-Fi each month over summer and 40% of travellers over summer chose the unlimited free text messaging option to keep in touch with family and friends.

Wi-Fi is most popular on flights to North America with the highest number of users logging on to Wi-Fi and by volume of data consumed. Emirates flights to Houston consume most data on board when compared to the rest of the network.

Sports reigns when it comes to Live TV. Emirates offers up to 8 live channels of sports and international news channels including CNN, BBC World News, Sky News, Euro News, CNBC, and NHK World. The most viewed channel on board was Sport 24 where fans created virtual “stadiums in the sky” as they watched the NBA Finals, the French Open, and the FIFA Women’s World Cup Final over summer. Currently, Emirates is screening all matches from the Rugby World Cup live on board on the over 175 aircraft equipped with Live TV.

In October, customers can look forward to blockbusters such as Spider-Man: Far from Home, Toy Story 4 and Beatles-inspired film Yesterday. The ice catalogue will also include TV shows like Season 2 of the HBO hit Big Little Lies and Season 10 of Modern Family; and the latest music from Freya Ridings and DJ Snake.