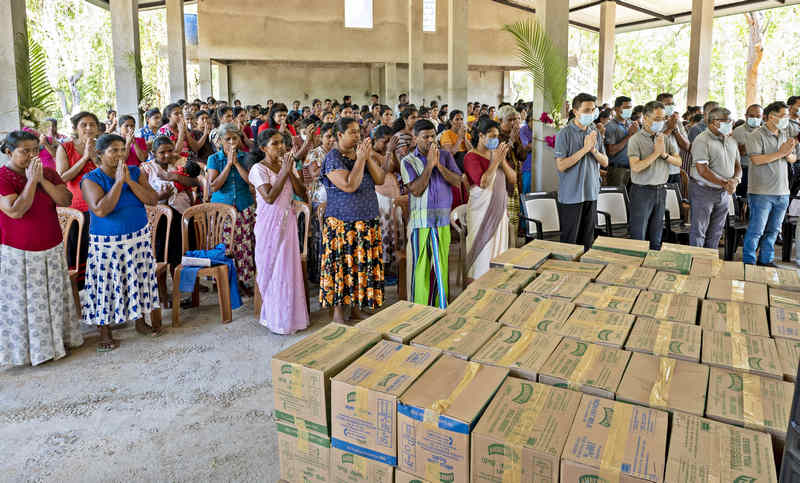 Dubbed ‘Hope Village’ after the hamlet was “adopted” for a flagship community development project funded by the China Merchants Foundation (CMF), Kandagasmankada is the highest-populated village in the Hambantota district, and the largest contributor to the agricultural sector within the Lunugamwehera division.

This ‘Hope Village’ — the second of its kind — was launched in 2022 as a development model village to assist marginalised communities in the Hambantota district. It is a collaboration between CMF – the CSR arm of the China Merchant Group – which has provided a budget of Rs 60 million, and the non-profit Nirmala Foundation. CICT and HIPG are the facilitators of the project.

The funding will provide the village a community centre, health centre, agriculture centre, playground facilities as well as financial assistance to the village temple, and will benefit approximately 2,170 residents.

CICT’s first ‘Hope Village’ project chose Pannila near Horana as the beneficiary. The company has already built a two-storey community centre at a cost of Rs 17 million for the village. The centre provides accommodation for several local government offices that provide essential services to about 2000 people.

A generous contributor to community welfare, CICT is also the principal sponsor of Sri Lanka’s Wheelchair Tennis Programme and has donated over Rs 54 million for the cause over the past seven years. CICT and CMF have also supported the “C-Blue Restore Sight Project” in Sri Lanka in collaboration with the National Eye Hospital, which has helped more than 400 cataract patients regain sight.

Hambantota International Port Group is a Public Private Partnership and a Strategic Development Project between the Government of Sri Lanka and China Merchants Port Holdings (CMPort). HIPG is currently in the process of fast-tracking the setting up of its industrial zone and developing partnerships with industries that wish to set up facilities in and adjacent to the port. The Port’s plans include the setting up of a reliable supply chain, both upstream and downstream, which will put Sri Lanka on the map for investors from across the globe.

CICT is the flagship overseas terminal of China Merchants Port Holdings Company Limited (CMPort). CMPort is the largest and a globally-competitive public port developer, investor and operator in China with investments in Mainland China, Hong Kong and overseas. CMPort has a port network portfolio spanning 50 ports in 26 countries and regions. Guided by the vision “To be a world class comprehensive port service provider” and supported by its domestic, overseas and innovation strategies, CMPort strives to strengthen its core competencies in global throughput, port service and management.

CICT pledges US$ 25,000 for sight-saving surgeries in Sri Lanka