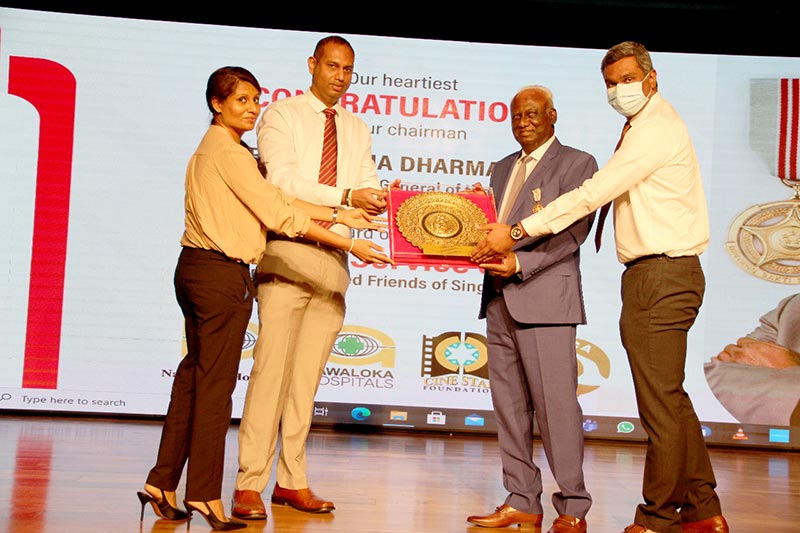 In recognition of his impactful and immense contribution to the people of Singapore, Dr. Jayantha Dharmadasa, Singapore’s Honorary Consul-General in Sri Lanka and Chairman Nawaloka Hospitals, was recently awarded the prestigious Public Service Star. He was conferred with the honour by The President of The Republic of Singapore, Her Excellency Madam Halimah Yacob, at the Singapore National Day Awards Investiture held on the 4th April, 2021 to felicitate figures who have gone above and beyond to serve the Singaporean community.

“I am deeply humbled to be presented with this lifetime honour and consider it an absolute privilege to serve, support and work hand in hand with the great people of Singapore. Sri Lanka and Singapore has always shared strong bilateral ties fueled by mutual growth and success for over 50 years. It is heartening and motivating to see the positive impact our efforts during this particularly dark period in our country has had in the lives of whom were supported. As always, I remain ready to offer my unending support to the nation, who has so warmly welcomed me into their midst to further strengthen the bonds our countries share,” stated Dr. Jayantha Dharmadasa, Honorary Consul-General to Singapore and Chairman Nawaloka Hospitals.

Instituted in 1963, the Singapore Public Service Star is awarded to any person who has rendered valuable public service to the people of Singapore; or has distinguished himself in the field of arts and letters, sports, the sciences, business, the professions and the labour movement.

In the immediate aftermath of the Easter Sunday attacks of 2019, Dr. Dharmadasa went well above his call of duty as an Honorary Consul-General to work tirelessly with limited resources and uncertainties on the ground to support Singaporeans in Sri Lanka who were struggling to seek assistance, information and assurance during the uniquely tense atmosphere at the time.

In his role as the Chairman of Nawaloka Hospitals in Colombo, Dr. Dharmadasa deployed his own staff to visit other government and private hospitals to check if there were any Singaporeans amongst the casualties, in addition to personally connecting with the Chief Judicial Medical Officer to inquire on the same. The Honorary Consul-General and his staff went out of the way to ascertain this and to provide timely information that made a massive difference at a time grief to Singaporeans in Sri Lanka and to their families back home.

This support went to the extent of helping the flight bookings for Singaporeans who were trying to fly out of Sri Lanka, and taking the pro-active responsibility to keep the MFA updated on all developments on the ground. These continued efforts brought much comfort to all Singaporeans who would otherwise have felt stranded and alone during the time of great distress.

In his role as Honorary Consul-General, Dr. Dharmadasa has also made great progress in promoting bilateral relations between Singapore and Sri Lanka, through numerous other efforts. He is one among 33 other Honorary Consuls-General of various nationalities appointed by the Republic of Singapore, due to his position as a highly recognised leader whose influence and extensive networks has helped open doors for the two nations to explore valuable economic opportunities, and enabled the two countries to turn official ties into partnerships and friendships.

Dr. Jayantha Dharmadasa is a businessman by profession. He counts over 41 years of experience in Executive Management and 36 years in the healthcare industry with numerous credits to his name. Under his visionary leadership, Nawaloka Hospitals is today Sri Lanka’s leading private hospital, one that has sought to differentiate by emulating the success of reputed hospitals in the Asian region; offering a strategic combination of advanced medical technology and expert medical care. Since then, the Nawaloka Group has consistently set the benchmark for excellence in healthcare both in Sri Lanka and across the South Asian region.

MAKING THE WORLD A BETTER PLACE – ONE COUNCIL AT A TIME!

Tokyo Cement Partners the Ministry of Environment to plant 200,000 Trees on Mahaweli Riverbanks