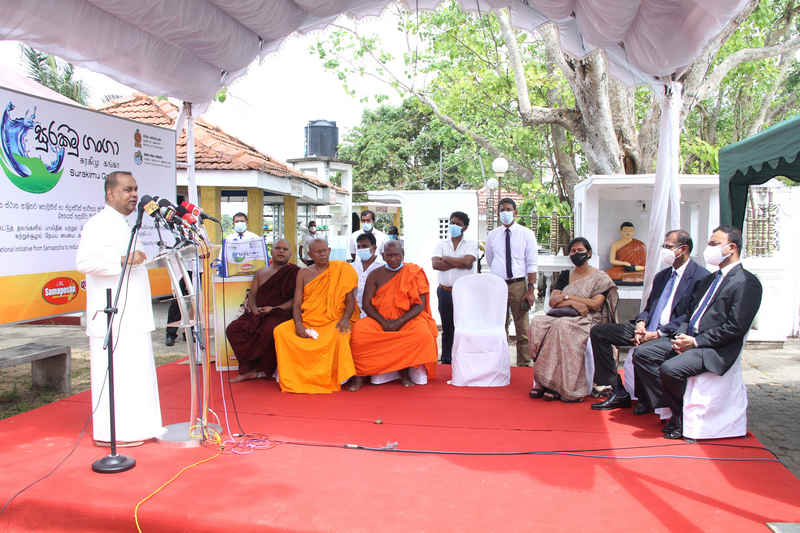 Continuing to commit to its national cause in protecting the environment and conserving Sri Lanka’s rich heritage for future generations, CBL Samaposha partnered with the Ministry of Environment and the Environmental Authority in delivering the ‘Surakimu Ganga’ national project which aspires to minimize the impact that human interventions impose on the environment. The project was ceremonially launched under the patronage of His Excellency, the President, Gotabaya Rajapaksa at the sacred site of Ruhunu Kataragama by the banks of the Menik River.

As a sub initiative of the ‘Surakimu Ganga’ national project, Samaposha launched an environmentally friendly ecological bag which aims to effectively reduce the use of polythene and plastic bags within various sacred sites across the country. The eco-friendly bag is donated to sacred sites in an attempt to keep these crowded sites free from non-decomposable plastic and polythene.

The eco-friendly bag donated by Samaposha to the public was ceremoniously launched at the sacred Pillava Bodhiraja Mahaviharaya in Boralesgamuwa recently, in the presence of the Honorable Minister for Environment, Mahinda Amaraweera who was presented with the inaugural eco-friendly bag by CBL Group Director – Nishka Wickramasingha, CEO of the CBL Food Cluster- Thilanka De Zoysa and General Manager Marketing – Food Cluster of CBL – Jayanga Perera.

During the launch event, the Honorable Minister for Environment, Mahinda Amaraweera said ‘that up to 50 Tonnes of plastic and polythene waste are collected at the Kataragama sacred site alone, annually. It is also reported that a considerable amount of polythene waste is generated from shops surrounding the sacred site. The Minister added that with government regulations seeking to limit and regulate the use of polythene bags, this ecofriendly bag has the potential to serve as a viable substitute’.

Highlighting the strategic impact that environmentally friendly, people-oriented business approaches could have on Sri Lanka’s long term Green vision, General Manager Marketing – Food Cluster of CBL – Jayanga Perera said ‘Samaposh is committed to preserving the environment whilst nourishing the future generation of Sri Lanka with good nutrition and good values. As such environment conservation becomes a key aspect in building good values, where we believe that children are the key driving force for this change for the country and the world. Therefore, big and small initiatives would help to change mindsets towards reducing non decomposable plastics in some way’.

Samaposha is the flagship brand of CBL Plenty Foods (Pvt) Ltd, a fully owned subsidiary of the CBL Group. The CBL Group is one of Sri Lanka’s largest food conglomerates and is a strong advocate for responsible, sustainable business practices. The Group was named Sri Lanka’s Best Corporate Citizen for 2020 as a result of its commitment to sustainable business practices and contribution to national growth.

Join Us and Unpack the Possibilities

‘WE CAN’: The journey of Rotaract Club of IIT to combat the misjudgment regarding “Menstruation”