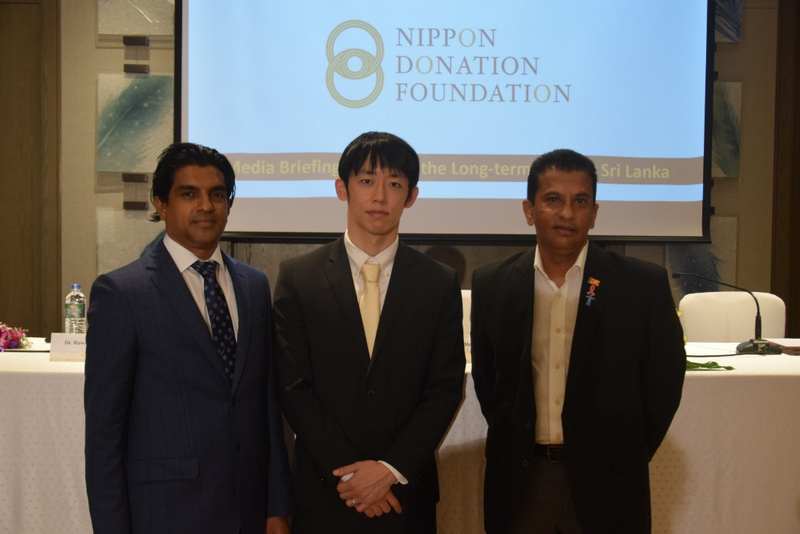 The Nippon Donation Foundation is active in over 30 countries around the world and continues its efforts to uplift many sectors in developing nations such as health, education, entrepreneurship and more. It is one of the leading donations incorporated in Japan by its founder and Chairman Mr. Yuma Muranushi, who from a young age has been working towards achieving lasting peace in the world. A self-acclaimed entrepreneur, Mr. Muranushi began investing at the age of 19 while studying at the Osaka University in Japan. At age 24, he established a private fund and entered the financial business, managing domestic and foreign funds, and repeating business buy outs.

Mr. Muranushi, is in Sri Lanka on the invitation of Dr. Ruwan Perera, the National Director for the Nippon Donation Foundation. He previously donated Rs.10 million worth of medicine to the National Hospital of Sri Lanka. He is facilitating former Sri Lankan Cricketer Mr. Roshan Mahanama, for his continuous social work and donations during these challenging times. Mr. Muranushi is also in Sri Lanka to seek avenues to expand his commercial and CSR activities widely in Sri Lanka through donations and FDIs on a long-term basis.

Mr. Yuma Muranushi commented on his visit to Sri Lanka: “I honoured to have been invited to Sri Lanka by Dr. Ruwan Perera. I see this country as one with endless potential, and it I imperative that we do as much as we can to assist this nation and its people in their recovery from the challenges brought about by the current economic situation. I am pleased to be able to facilitate Mr. Roshan Mahanama, whose generosity during these challenging times has been invaluable.”

Dr. Ruwan Perera is an electrical engineer who studied at the Tokyo University in Japan and worked at the Sony Corporation for over 20 years at a senior level. Dr. Perera holds 3 global patents under his name and facilitates commercial and non-commercial bilateral relations between Sri Lanka and Japan. He is currently the Chairman of a conglomerate in Sri Lanka, that holds over USD 100 million worth of interest in the country. The latest investment was USD 25 million to build the first ever airport transit hotel in Sri Lanka.

The Nippon Donation Foundation has pledged to continue with their donation programmes and initiatives to previously identified sectors. The organisation will also continue to bridge Japanese investors to invest in lucrative projects in Sri Lanka. Additionally. Dr. Perera will facilitate local exporters who want to enter the Japanese market and as made arrangements for a Japanese investment delegation to Sri Lanka in the next few months to help the people and the government of Sri Lanka recover from the prevailing economic crisis.

CICT pledges US$ 25,000 for sight-saving surgeries in Sri Lanka