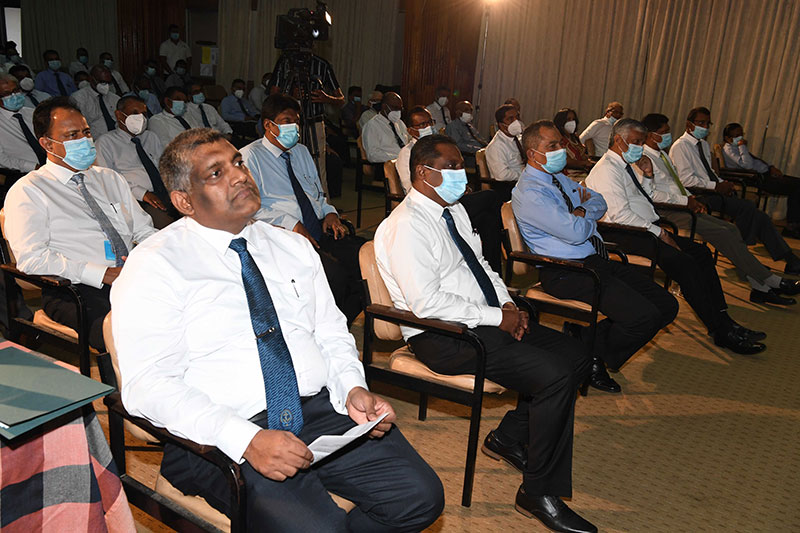 Under resource contribution and direction of Chairman of the Sri Lanka Ports Authority (SLPA) – General Daya Ratnayake, Company of Master Mariners of Sri Lanka, recently conducted a special lecture on ‘Leadership in Practice’ for Maritime Experts at the Mahapola Port and Maritime Academy (MPMA) of SLPA. The lecture presentation was based on the practical experience of General Daya Ratnayake, during his tenure as former Army Commander.

Speaking at the event, General Daya Ratnayake said that in order to become a leader, one must not be afraid to accept challenges and work hard to overcome any challenge and move towards success with courage. He also said that visionary leadership was especially important to maintain every institution both under normal and in challenging times as in the current context. He emphasized that making the right decisions was very important for the welfare of the country and the people.

He also said that foreign influences on Sri Lanka’s indigenous leadership had a profound effect on Sri Lanka’s culture, leading to the collapse of the country’s self-sufficient economic patterns that had prevailed for thousands of years. He emphasized that although 73 years had passed since Sri Lanka received independence before which the country had been subjected to colonialism, we were still in a pro-foreign position. Gen. Daya Ratnayake also emphasized the need to re-establish the discipline country’s citizens acquired through Buddhism, especially in the social strata, and the importance of transmitting the legacies and values ​​the country has inherited since time immemorial through cultural, religious and moral aspects to future generations.

He also discussed in depth on how to develop leadership skills of the mariners through; motivating leadership skills, setting the right vision through the right role models, leading to success through challenges, and developing morale.

Company of Master Mariners of Sri Lanka was established in 1990 by a handful of Master Mariners with the objective of encompassing all Sri Lankan Master Mariners into a cohesive unit and with the objective of being an entity for the development of the maritime industry while making its professional knowledge base available to the government and the industry. Today, the organization has achieved a significant recognition in the maritime industry taking on a number of measures, including contributing to the improvements of the legislation of the Sri Lankan maritime industry. The membership of the Company of Master Mariners of Sri Lanka is encompassed of a wide range of industry representation including the Merchant Shipping Secretariat of the Ministry of Ports and Shipping, the Sri Lanka Ports Authority, Ceylon Association of Shipping Agents, Maritime Training Institutes, Ship-Owners, Shipping Agents, Marine Surveyors, Flag State Inspectors and vetting surveyors in addition to Masters in command of the largest ships trading globally.

The event was also attended by a number of senior Marine professionals, representing various sectors of the island’s renowned maritime industry, at the invitation of Company of Master Mariners of Sri Lanka.