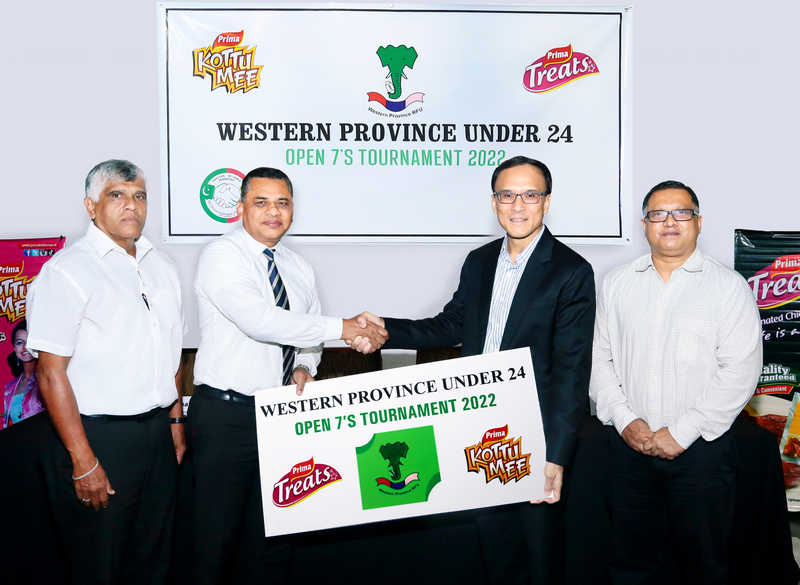 Coming on board for the year 2022, Ceylon Agro Industries Ltd. – Prima Group Sri Lanka recently announced the Co-Sponsorship of its leading brands Prima KottuMee and Prima Treats for the “Western Province Rugby Under-24 Open 7’s Tournament”, continuing to stay true to its commitment and promise of uplifting young, local sporting talent in Sri Lanka.

The much-anticipated one-day rugby tournament, played between “A” Division Clubs and Development Clubs, is slated to take place on 11th September 2022 from 8.30 a.m. at Police Grounds, and Mr. Wimal Senanayake was announced this year’s Tournament Director.

Teams competing under “A” Division Clubs are: Navy, Old Mudaliyans, and Zobra in Group A and Peterson’s, Old Zahira, and Police/Golden Brown Rfc in Group B.

Rizly Illiys, President of Sri Lanka Rugby (SLR), shared his thoughts on the impact rugby has not only on aspiring sportspersons, but also on the country at large, and expressed his keenness on developing Sri Lankan Provincial Rugby to the next level.

Mr. Sajith Gunarathne , Deputy  General Manager, Ceylon Agro Industries ,Prima Group Sri Lanka, shared: “We at Prima have always been a force behind empowering youth through sports. With this vision in mind, we are happy to come forward to support the Western Province Rugby Football Union’s efforts to uplift the development of rugby under the guidance of Sri Lanka Rugby.”

Rugby is one of the most popular and loved team sports in Sri Lanka, boasting a rich history spanning decades. To date, many registered rugby union players have brought glory to the Island Nation by making Sri Lanka a top rugby playing nation of Asia.

As a renowned and leading nutrition provider, Prima Group Sri Lanka believes in the power of sports in building character of young individuals, equipping them with life skills such as strategic thinking, leadership, perseverance, and team spirit that help them take on challenges and grow.