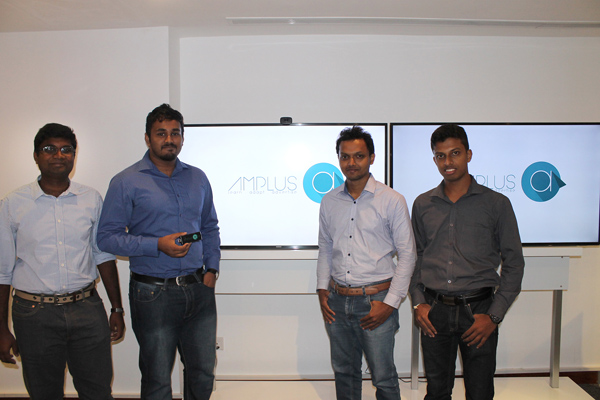 The BitMasters, a group of students from the Department of Computer Science and Engineering, Faculty of Engineering at the University of Moratuwaare on their way to the Imagine Cup World Finals, hosted by Microsoft, after having won the Sri Lankan leg of the competition.

Microsoft’s Imagine Cup is an annual competition which brings together young technologists from all over the world and encourages them to use technology to help solve some of the world’s toughest challenges. Teams will compete under the category of innovation

The BitMastersteam demonstrated their potential by creating a low cost, easily operated and intelligent digital signage platform namedAmplus which they believe would revolutionize the digital advertising industry. The digital signage helped them win the innovation category in the local Microsoft Imagine Cup and they will now compete internationally at the Imagine Cup finals in Seattle, Washington.

The Amplus is an intelligent digital signage platform for advertising which includes face detection and crowd recognition features. The deviceallows analyzing of human features and advertisers to gain real-time statistics of the performance of their advertisements.

“Organizing Imagine Cup Sri Lanka for the past 12 years has been my privilege and I’ve been able to witness some of the greatest inventions by the most humble and deserving students. I’ve seen the competition grow over the years with and I am truly pleased with the results we have achieved thus far. This year Sri Lanka is one of 35 countries that will be competing in the finals and I am ever so proud of the BitMasters for making it to the top. I am certain that the entire experience will enrich these students and inspire them to continue to innovate and create,” said Wellington Perera, DX Lead, Southeast Asia New Markets, Microsoftand competition coordinator.

The winners will make their way to Seattle, WA, where the international competition will take place on 27th July 2016 followed by the world championship on July 29th. At the World Finals, the teams will compete to be crowned champions in their respective categories and the chance to win $50,000. Then, one team will go on to win the coveted Imagine Cup and the grand prize, a private mentoring session with Microsoft CEO, SatyaNadella.