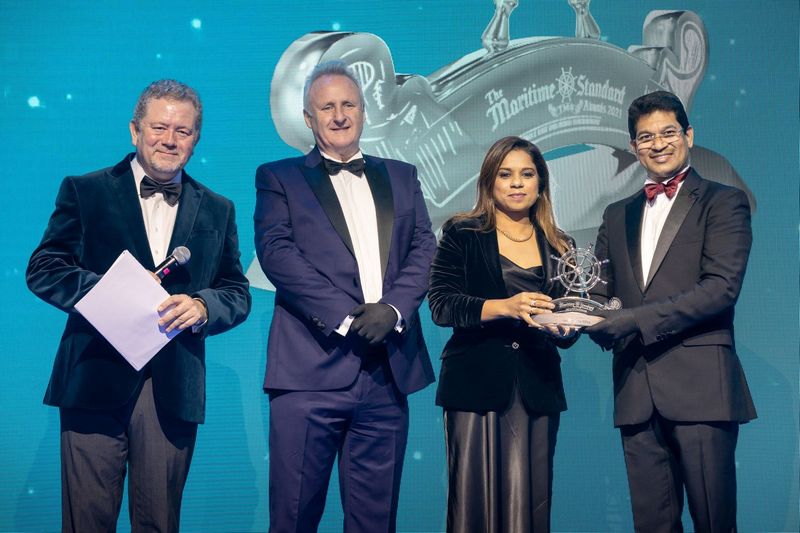 Recognizing the immense contribution towards the maritime sector and the dynamic leadership excellence, the Managing Director of McLarens Group, one of Sri Lanka’s largest diversified conglomerates with a rich corporate heritage spanning over seven decades, Ms. Shehara De Silva was recently bestowed with the ‘Woman in Shipping’ award at the recent Maritime Standard Awards.

Ms. De Silva recently created history by becoming the first woman Chairperson of the Ceylon Association of Shipping Agents (CASA), the voice of the shipping industry in Sri Lanka.

Held on the 22nd of November at the World Trade Centre Dubai, the eight annual Maritime Standards Awards saw the participation of over 700 executives from across Asia, Europe and Middle East. This milestone event celebrates the achievements of some of the top performing personalities and companies in the shipping, ports and maritime industry sectors.

Since its humble beginnings going back to 1944, the group has today evolved into one of the largest conglomerates in Sri Lanka with business interests ranging across diverse industries, with the Maritime and Logistics sector taking centerstage as its core operations, exhibiting a strong growth momentum over the years. Other interests include Petroleum and Energy, Manufacturing and Distribution, Property and Strategic Investments and Leisure.

The culture built around its shared values and philosophy over the many decades has made McLarens Group an ambitious, progressive and inspiring workplace. The Group was awarded the Gold Award under ‘Large Enterprise Category’ at the recently held Great Place to Work award ceremony 2021 and was also listed among the 70 best ‘large’ Workplaces in Asia earlier this year in addition to being featured among the country’s ‘Best Workplaces’ list by Great Place to Work Sri Lanka for six consecutive years including being inducted to its Hall of Fame last year.

McLarens Group represents some of the world’s largest liners, a feeder line and numerous NVOCC operators, and owns and operates its very own fleet of vessels, tugs and boats, and has the largest bunker barge fleet in the country. It also strengthened its contribution towards uplifting maritime training in Sri Lanka through its subsidiary MMA in collaboration with the Ceylon Chamber of Commerce earlier this year. McLarens Group was also ranked amongst LMD’s 50 Most Awarded Companies of 2019/20.